During your dive, you’ll be interacting with a whole new type of creature: marine life. Underwater creatures make your dive memorable. Without these swimming wonders, your dive will not be as exciting and unique. Knowing what kind of animals live in the ocean is very important and is a matter of safety, too. This way, you can also study how to interact with these creatures and how to avoid marine envenomation.

The variety of creatures underwater is as vast the ocean itself. On its endless depths hide a new paradise you’re yet to discover. From corals, fish, and pelagic species, every dive is an experience to witness a whole new world.

However, as much as these creatures are incredibly beautiful, there’s one rule among scuba divers: never touch anything. It’s important to know these creatures as well as the proper way of interacting with them.

What type of animals live in the ocean?

The ocean is mysteriously filled with various marine beings. Before you dive, it’s important that you know the basic types of creatures you’ll see. The following are main groups of marine life that you’ll be interacting with during your dive:

Each diver has their own proud moment of swimming through a school of fish. It’s a spectacular moment, much so if you chanced upon colorful species congregating. So far, there are over 28,000 fish species swimming in the oceans of the world.

There are five classes of extant fish: Ancothodii, Agnatha, Osteichthyes, Chondrichthyes, and Placodermi.  During your dives, you may have seen groupers, salmon, grunions, sailfish, and more.

Take note that fish species vary based on the depth of your dive. Skilled divers are lucky enough to lay eyes on pelagic species or those that live at or close to the ocean bottom.

However, you should also remember that some fish species are poisonous. The likes of stonefish, lionfish, scorpionfish, Northern stargazer, and Spotted weevers are venomous. You must signal it to your buddy the moment you spot poisonous fishes.

Mammals in the ocean? Although mammals are usually terrestrial, some are living underwater. There are aquatic and semi-aquatic mammals, too, which prove how marvelous nature is.

Mammals are animals with mammary glands and are warm-blooded.

Some of the most common mammals that you may encounter underwater are dolphins, manatees, whales, seals, sea otters, and solar bears. Although most of these mammals stay underwater, some spend their time on land to breed and molt. Most marine mammals are large and can be difficult to spot on most dives.

Invertebrates are marine creatures with no backbone. This marine life includes starfish, sea slugs, jellyfish, and more. They are different from shellfish since the latter has a hard shell that protects its body.

Overall, marine invertebrates are filed into 30 different phyla. Here’s a quick fact about invertebrates: they make up about 98% of all species on Earth. This is also the same underwater. Invertebrates dominate the population of the entire marine life.

Some of the most popular invertebrates in the ocean are sponges, marine worms, echinoderms, and arthropods. Arthropods are crustaceans, insects, and arachnids that live underwater.

Are there poisonous marine invertebrates? Yes. You should watch out the likes of sea urchins, some species of jellyfish (box jellyfish), and cone snails. Usually, the divemaster will inform the group if there are any dominant invertebrate species on the dive spot which poses a direct threat.

Take note that mollusks are also invertebrates as well as crustaceans. Crustaceans are marine creatures with a carapace (hard exoskeleton).

Sharks are similar looking with many marine mammals, but these intimidating beings of the sea are fish. They have skeletons with cartilage, similar to most fish species.

Moreover, sharks are cold-blooded with gills where they breathe. As the shark swims, water gets forced through the gills, where oxygen is filtered. With this, sharks will die if they stop swimming. The likes of whale sharks, mako sharks, and hammerhead sharks have to keep moving in order to survive.

Aside from this, sharks are known for their row of sharp teeth. They also have extra powerful jaws that they use to catch and chew food.

So here’s the ultimate dive question: will a shark rip me to death? As long as you keep your distance, the shark will not harm you. In fact, only 20 people a year get killed by a shark. More sharks are killed by people than sharks killing humans.

If a shark starts to circle you, stay still and maintain your eye contact with the creature. Never play dead or you’ll be mistaken as a food source. Always stay in an angle where the shark is in front of you. Most of all, don’t pee or bleed underwater. Sharks have a strong sense of smell and they will trace these substances easily.

Marine reptiles are one of the most interesting underwater creatures you can encounter. However, you should also watch out as some of it can be highly venomous.

Turtles are the most popular and most sought-after marine reptile. There are also sea snakes that inhabit corals. Most sea snakes are venomous but only a few cause serious envenomations. Still, you should steer clear of these creatures when you spot one.

How to interact with marine life

Aside from knowing the animal creatures that live in the ocean, it’s important that a diver also knows how to interact with them. This will prevent any accidents while keeping both the diver and the marine creature safe. For your next dive, keep the following things in mind:

1. The golden rule: no touch

Remember, you’re only a visitor to the underwater world. You should never touch or disturb the creatures in their natural habitat. Otherwise, they may fight back or you’ll damage the natural course of their lives.

Wild marine animals are easy to trigger. Even a gentle touch can prompt a defense mechanism.

Aside from your safety, not touching anything also prevents you from harming the underwater life. Corals take thousands of years to form. Touching it, regardless if you have gloves on, is causing stress to the creature.

Also, you may be carrying various bacteria that may infect and kill marine life if you touch them.

Regardless if you’re swimming with a school of fish or in the middle of a shark attack, you should remain graceful. Any sudden movement may cause further aggression on the part of marine life.

Move and swim slowly, as if to mimic the movement of marine animals. If you need to approach something, remain calm and do so gently.

If you want to get a good look at a marine creature, don’t startle them by swimming aggressively. Marine animals are friendly if you are too.

It can be pretty exciting to take a closer look at a marine creature, but you should never forget where your equipment goes. Many of the beautiful aquatic animals you’ll see are very delicate. You can easily damage their bodies with a gentle touch or a slight bump from your loose emergency regulator.

Always keep any loose equipment within your chest area. Also, avoid scraping off the sea bed as it will bring muck up and ruin your field of vision.

Remember this: dive or muck sticks aren’t meant to poke fish and corals. As much as possible, don’t bring any muck sticks underwater if you don’t have any use for it. Besides, some dive spots may prohibit this gear since it promotes physical contact with marine life.

It’s important to keep your distance when observing marine life. Smaller creatures may circle around you or give you a harmless nibble. Having a good look doesn’t mean you’re going to be face to face with the marine creature. A few feet away is the rule of thumb. If the fish approached you, let them be.

However, if you feel threatened, back out slowly. Make sure that you’re not going to bump or damage anything in the process.

6. Know which creature to avoid

It’s easy to get lost in the beauty of the underwater. However, you should also watch out for poisonous and dangerous marine life that may cause physical damage to you. You should know which creatures are poisonous and what to do should you encounter one.

Lastly, blend in with the underwater environment. Like predators using a camouflage, you can prevent marine life attacks if you can conceal your presence to some extent. You can hide behind rocks and overhangs. By doing this, pelagic animals will be more comfortable to swim around. It also increases your chance of seeing them up close.

Knowing the types of animals that live in the ocean and how to interact with it is a crucial skill for every diver. It will keep you prepared for any potential interaction or attacks. Aside from mastering your diving techniques and gear, being prepared with marine life encounters is a must. 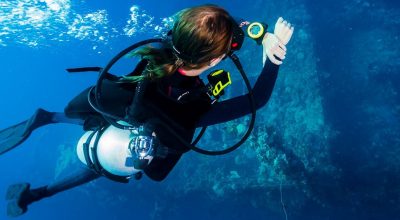 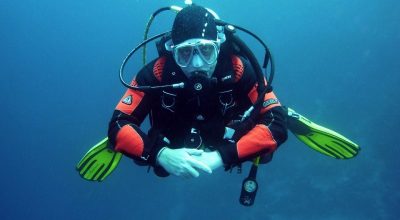